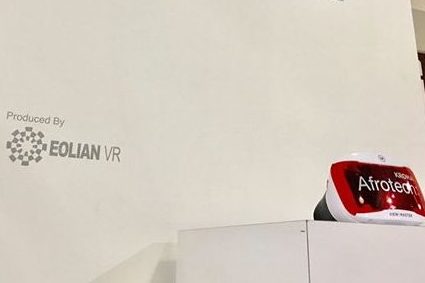 The interactive Virtual Reality art installation–a first for the Miami area–brings gallery viewers into a new medium of creativity.

MIAMI, FL – February 5, 2017 —  On Saturday February 4th, 2016, Miami’s KROMA Art Space and Studios unveiled a new exhibition called AfrotechVR. AfrotechVR incorporates virtual reality with traditional art mediums to transport gallery viewers into a new world of creativity. The piece is an extension of a larger art installation at Kroma called Afrotech: The future of the Afro American Narrative. Afrotech and the Afrotech VR Experience feature the works of Mshindo Kuumba and Ashley Woods.

To produce this cutting edge piece, KROMA enlisted EOLIAN, a mixed reality software and content development firm based in the NYC area.

“EOLIAN’S techniques for rapidly prototyping and producing VR content from traditional media, remotely, were critical in making this a success,” says Rodney Jackson, Executive Director of the KROMA Art Space and Studios.

“We’re proud to be part of this project and work with KROMA on their mission to serve as an affordable and contemporary space for local artists. The creative output of these artists will be an extraordinary advancement in connecting Coconut Grove’s rich past, present and future,” says John Cannizzaro, COO of EOLIAN.

About EOLIAN
Eolian’s mission is to save lives using Augmented Reality (AR), Virtual Reality (VR) and Artificial intelligence (AI) technologies. Founded in early 2016, Eolian provides government and enterprise clients with a variety of products and services within the Augmented Reality, Virtual Reality, and 360-degree video arenas. Drawing from a combined 30+ years&#39; experience in software development and marketing, Eolian’s team is capable of developing and deploying applications on the following AR and VR HMDs (Head-Mounted Displays): Microsoft Hololens, HTC Vive, Gear360, PlaystationVR, Google Cardboard, and Meta2 among many others.

About KROMA
KROMA is a new collective art space located on Grand Avenue in the heart of Coconut Grove consisting of 18 artists studios and a communal gallery space. KROMA’s mission is to serve as an affordable, contemporary space for artists, whose creative output will contribute to connecting the spirits of Coconut Grove’s rich past, present and future.

As a premiere arts incubator and the latest initiative of the Collaborative Development Corporation in partnership with the Barlington Group, KROMA will host exhibits showcasing the myriad of perspectives that are a result of the African diaspora and beyond. KROMA looks to advance the knowledge and practice of the arts through education and programming, which will not only enrich the lives of the community, but further develop the careers of resident artists.